After years of discussion, planning, and fund-raising, Kohala Hospital is set to begin demolition on its Emergency Room. The ER renovation/relocation project kicked off on July 1, 2013. A commemorative “wall-breaking” ceremony on June 20th included a blessing, a presentation on building plans and work phases, and light refreshments. The community was invited to join the festive occasion and to view the long awaited results of their investment, time, and patience.

Kohala Hospital is in the midst of ongoing major renovations to our facility. Not only is the hospital looking better, but the renovations and upgrades enable us to deliver improved and more efficient healthcare to our patients, residents and community.

The Winter/Spring 2013 newsletter from Kohala Hospital for the community of Kohala. 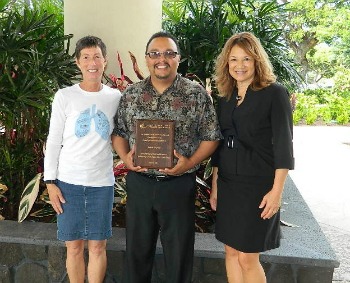 Kealakekua, Hawaii – On January 9th, Kona Community and Kohala Hospitals received the Award of Community Excellence from The Coalition for a Tobacco-Free Hawaii in recognition of their recently adopted smoke and tobacco-free campus policies. Both campuses, which comprise the West Hawaii Region of Hawaii Health Systems Corporation, became smoke and tobacco-free effective January 1, 2013.

Brenda Larson, West Hawai’i Community Coordinator with the Coalition for a Tobacco-Free Hawai’i said, “The presentation of these awards recognizes both